Staff at Glandŵr Cymru, the Canal & River Trust charity in Wales, are on top of the world with double celebrations at the Pontcysyllte Aqueduct and Llangollen Canal World Heritage Site in North Wales.

Peta Hearn, 26, destination assistant at the Trust’s Trevor Basin Visitor Centre, which serves the aqueduct, was named ‘Tourism Rising Star’ at the annual Wrexham Tourism Ambassador Awards 2017. Peta has worked as a seasonal assistant for the past two summers and has recently been taken on as a permanent employee. 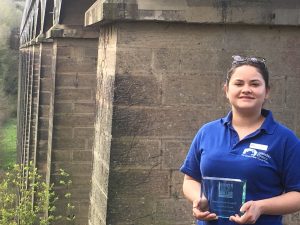 Canal & River Trust destination assistant Peta Hearn with her ‘Tourism Rising Star’ award at the Pontcysyllte Aqueduct, near Wrexham
And on top of this achievement, a stunning two minute aerial film of the Pontcysyllte Aqueduct has catapulted to the top of the Canal & River Trust’s social media rankings as the most popular waterway video of the year. Posted on the Trevor Basin Visitor Centre Facebook page on 17 March, more than 120,000 people have now watched the film which takes the viewer on an annotated flight around this outstanding wonder of the waterways.

Lynda Slater, Canal & River Trust destination supervisor at Trevor Basin, said: “This is a fantastic way to celebrate the start of the main tourist season. Peta truly is a rising star at the World Heritage Site. She makes everyone feel welcome and has a special rapport with our visitors who come from all over the world to admire Britain’s longest, highest aqueduct.  She has impressed us all with her ability to learn quickly on the job and I am delighted we have been able to offer her a permanent position.

“The people and the place are both equally important in giving visitors a great experience. And everyone who has watched the two minute film can’t fail to be impressed by our amazing aqueduct. The footage was taken by a drone in the height of summer and the whole area looks spectacular. It’s a great advert for the Llangollen Canal and this wonderful corner of North Wales.”

The Canal & River Trust cares for 2,000 miles of the nation’s waterways, including hundreds of  aqueducts and bridges.Constructed by famous canal engineers Thomas Telford and William Jessop between 1796 and 1805, Pontcysyllte Aqueduct is a masterpiece of civil engineering and forms the centrepiece of a World Heritage Site.

Measuring a record-breaking 1,000 feet long and 126 feet high, the aqueduct carries the beautiful, rural Llangollen Canal over the River Dee valley. A cast iron trough, which holds 1.5 million litres of water, is supported by 18 slender sandstone piers and 19 elegant arches, each with a 45 foot span.
·         Help promote the Pontcysyllte Aqueduct on World Heritage Day, 18 April, by joining in a mass World Heritage Site tweet for one hour between 6.04pm and 7.04pm. Share five extra-special things about your WHS using the #WHSHour hashtag.

For more information about Pontcysyllte Aqueduct and the Canal & River Trust, including how to volunteer and donate, visit canalrivertrust.org.uk.

Pontcysyllte Aqueduct and Canal became a World Heritage site in 2009, recognised alongside just 1,000 sites around the globe that are deemed to be of outstanding universal value, such as the Grand Canyon, the Pyramids and Stonehenge.

Facts about the aqueduct:
·         The cast iron trough which holds the canal water is 307m long and at its highest point it is 38.4m above the river Dee

·         To keep the aqueduct as light as possible, the slender masonry piers are partly hollow and taper at their summit.

·         Constructed between 1796 and 1805, Pontcysyllte Aqueduct is a grade one listed building and a scheduled ancient monument and forms the centrepiece of the 11 mile World Heritage Site.