Organisers have announced that Nottingham Canal Festival is set to return to the city’s historic  Castle Wharf this autumn after last year’s inaugural event proved a big hit.  The Canal & River Trust, the charity that cares for 2,000 miles of historic waterways in England & Wales is again hosting the festival which aims to celebrate all that’s great about the local canals and
the River Trent which winds its way through the county. Last year more than 3,000 people descended on Castle Wharf in the heart of the city to take in a boat trip, try canoeing, have a go at angling or just enjoy live music by the water. Historic boats from across the country moored up by the towpath giving people a flavour of what the wharf would have looked like in its industrial heyday.
The Trust is using the feedback gathered from last year’s event to make this year’s festival, taking place on Saturday October 1st, even better. Visitors are being promised the same friendly atmosphere and opportunities to try something new that made last year’s festival so popular.
Danny Brennan, chair of the Canal & River Trust’s East Midlands Waterway Partnership, said; “The first Nottingham Canal Festival was a great success – it brought thousands of people down to the canalside to enjoy a boat trip, try their hand at fishing, enjoy some of the traditional music or just have a bite to eat in a really friendly atmosphere.
“This year will have all those really popular attractions again but we also want to build on last year’s success and encourage more people to come down and experience what life is like by the
waterside. So, let’s have even more kids catching fish and trying out canoeing, and let’s see more people getting their first view of Nottingham from the canal, rather than the towpath. All these activities were top of the list in visitor feedback last year, they’ll all be back this year.
“At this stage we’d particularly love to hear from anyone that wants to bring a historic boat along; they’re always really popular with visitors and are a great way of bringing the colourful history of our waterways to life.”
For more information on the festival or to arrange bringing a historic boat along contact Demi Edmunds on 0115 9258777 or at demi@perfectmotion.org.uk 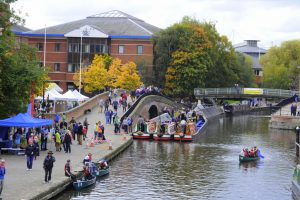 Boats at the 2015 Nottingham Canal Festival

Complete guide to life on a boat