The Birth of the RBOA

T’was a dark and stormy night, in the year of ’63, and the natives were revolting!

Shadows could be seen furtively heading from all directions towards a secret rendezvous, where the lights were low, curtains were drawn tight and the door opened only just far enough to let in the shadows, when the password ‘down with the landlord’ was whispered.

The secret venue was actually a converted concrete dumb barge called The Mikado,  moored at the head of D’Oyly Carte Island, on the Thames at Weybridge.  The date was 9th May, and, by the end of the evening, an association had been formed, with the boat owner in the chair, supported by several others as committee members, including myself.

For some time before, the landlord’s actions had been causing the live-aboards much grief – bullying the wives while the guys were out at work, charging excessively for moorings and materials and generally being tyrannically aggressive.  There had been sotto voce grumbling chats going on in various boats around the island for many months, and things had now come to a head.  One of the boaters had recently threatened the landlord with being thrown in the river if he didn’t stop harassing the wife, so something had to be done!

And so, the RBOA was born.  The landlord was tackled, and threatened to throw us all off the moorings if we didn’t desist in our activities.  Several of us did move off, some to other moorings and some ashore.  But the RBOA went on, from strength to strength, with the emphasis moving away from landlord-bashing to wider concerns – persecution by local authorities being a major threat, pressure on waterside land from developers another, suspicion by river and canal authorities that we were prime causes of obstruction and pollution – it seemed that the world was against us!  Some of those boaters who were fortunate to have considerate mooring landlords and who were reasonably secure were understandably unwilling to join in and raise their head above the parapet.

And there were, of course, those boaters who let us down, with unsightly (and sometimes unsafe) boats and piles of rubbish on shore.  So the RBOA’s prime task was seen to be to change hearts and minds of those around us, but an aspect of the situation which was hard to get over to the boaters themselves was that many land-lubbers were jealous of us, and we were seen much as travellers are now – occupying prime living spots without any of the burdens they had to put up with – rates (council tax) being the usually-quoted example, but also planning permission.  We were often referred to as waterborne gypsies.  Of course, it was the affordability which had attracted most of us to the life in the first place, so in a sense, that bit was fair comment!

In the formative years which followed, many of us took turns on the committee, until either moving ashore, getting divorced, emigrating, or, in one case, taking to long-term cruising!  New members joined from up and down the Thames and from canals.  MPs and ministers were lobbied, the newsletter started, flags and other identifying items were made, the flag logo and the watchword ‘I’m a Floating Voter’ created, and the association tried to help boaters who found themselves on the wrong end of public and authority opinion. Of course, in the early days, particularly, we were all very naïve and ignorant of the planning and other legislation which was used as a club with which to beat us.  Several of us saw the solution to be the purchase of our own bit of waterside, and one or two even managed it!  Planning and water authority permissions would still have been necessary, though, and that was most often the stumbling block, even if cash could be raised. 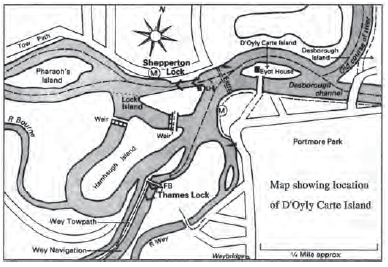 This disparate mixture of floating homes, in various states of repair and with minimal facilities, was a far cry from the well-equipped live-aboards which I read about in Soundings today, but the camaraderie which came out of everybody having to cope with the same difficult situations was something I’ve never experienced since.  Most of those boaters were in the same ‘boat’ – just married, first home, new babies, impecunious, so we all had the same challenges, and many of the friendships cemented then have endured.  Of course, those who chose to take up that life were, and still are, people who are prepared to do things themselves and take responsibility for their actions and situations, but with such a close-knit community as existed on the island in those days, the ready help from all around – babysitting, flood-defences, recalcitrant engines, frozen gas bottles, leaks, bottom-painting, caulking, etc, etc, made life not only bearable but very enjoyable.

Despite the efforts of the landlord (and a bit, perhaps, because of it), life was great fun.  Getting from the island to the mainland was, to start with, a rowing-boat ferry, prams being man-handled aboard and ashore, complete with inmates.  This was followed by a chain ferry, and finally a bridge was erected (It’s still there).  The mobile boats made trips to up- and down-river pubs, and parties were held on every conceivable occasion, often on ‘Three-Tree’ island in Hampton or the water-board island in Weybridge, with bonfires of combustibles towed there in dinghies.

Reading Soundings now, it’s a great satisfaction to us oldies to see how the association has developed into a much more professional and effective organisation.  Over the nearly-fifty years since the RBOA was born, our world has changed considerably, with materialism and monetarism now having much more influence.  Waterside properties are some 40+% more expensive than similar ones elsewhere, so it’s not surprising that houseboats in prime locations such as Chelsea are so valuable.  That’s market forces for you.  Our waterways are much more crowded, and marinas abound.  But residential boats seem much more accepted, and the RBOA can take the credit for that.

Well done, keep it up! 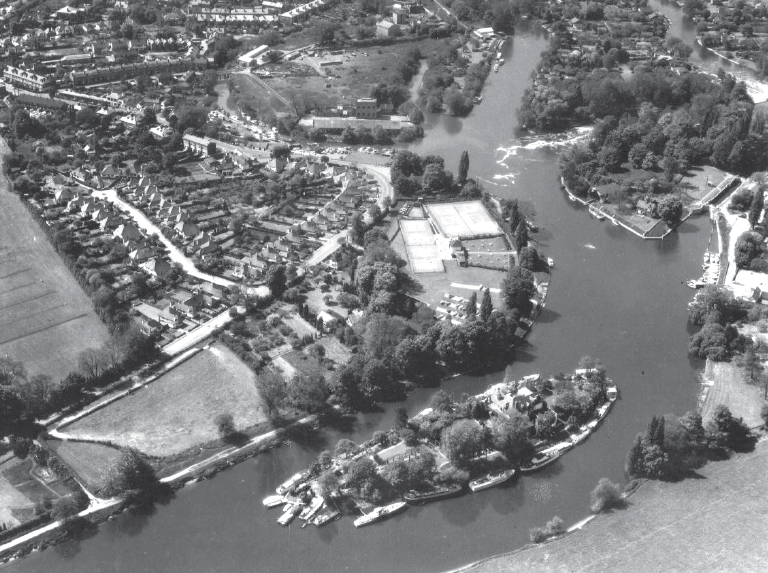 Written by Ed White (A Founder Member) for the July/August 2013 50th Anniversary edition of “Soundings”.